TASTE THE DIFFERENCE FOR YOURSELF!

We invite you to come and savour the very best of Middle Eastern baking expertise and tradition. Continuing a practice begun centuries ago, Pâtisserie Royale uses only the finest ingredients to offer the very best in traditional Lebanese and Syrian pastries. Attentive service, honesty and the finest quality ingredients are what separate Pâtisserie Royale from everyone else. Taste the difference for yourself!

Crispy and Fresh. Made with the finest ingredients.

Made with fresh cream or cheese. Keep refrigeratged.

Create your own party tray or mixed box. Choose from a large variety of baklava and cookies.

At the centre of this place is a gentleman named Mohammad Jamous. He is originally from Tripoli and he came to Canada in the mid-70s, found himself in Montreal. He says he wasn’t intending on ever becoming a baker or a cook, but he was influenced by his dad, who is this well-known master baker.

So he’s in Montreal, which has a very thriving Lebanese community going back many decades, and he finds himself working at a very popular bakery there called Pâtisserie Mahrouse, which is still around to this day. That’s where he spends a decade and a half mastering baklava. 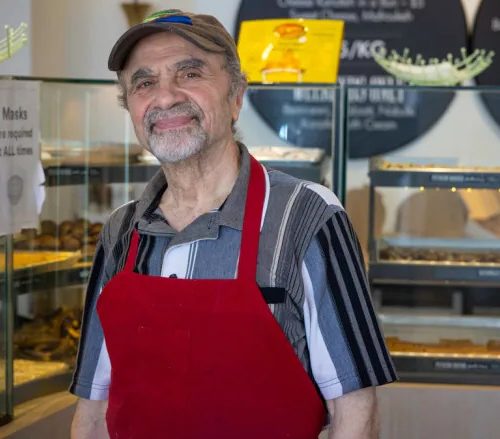